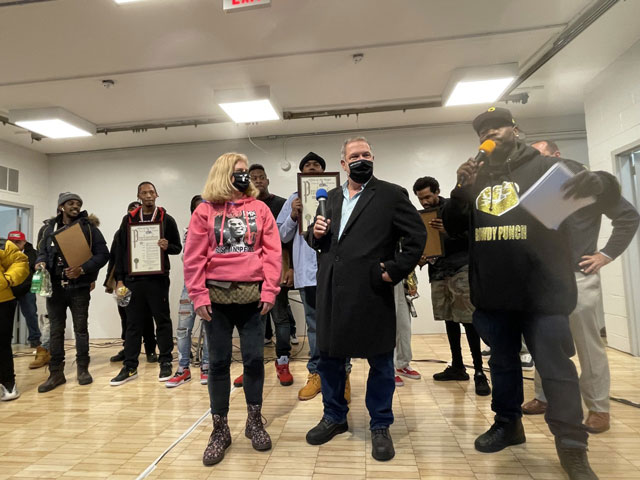 A huge congratulations to DQ The Don and Diaa for winning the title of “X factor” at the DMX Birthday celebration on December 18.

More than 300 people attended the celebration in the gym at 10 Brook Street with live performances by finalists in the month-long contest to celebrate musical talent in Yonkers.

In the spirit of late rapper Earl “DMX” Simmons, contestants performed for celebrity judges. The evening, organized by MHACY and DJ Superior, was widely publicized and shed a positive light on the City of Yonkers.

“We have some incredible talent and creative energy here in the City of Yonkers,’’ said Yonkers Mayor Mike Spano, who awarded the prizes. “This contest put a spotlight on the good things that are going on here in our city.’’

The contest was the idea of Wilson Kimball, President and CEO of MHACY, who became interested in learning more about hip hop after a mural was dedicated to DMX at School Street after his death last April.

The first-place winner of the contest received a $500 gift card from MHACY and Def Jam and will be featured on the DMX social media feed. Runner ups will receive a $100 prize.

The top 5 winners and their videos are as follows: