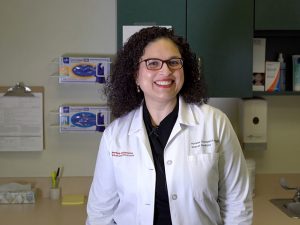 With vaccination rates lagging behind in many communities of color, the Municipal Housing Authority for the City of Yonkers (MHACY) has launched a campaign to allay fears and encourage its residents to get the vaccine.

As part of the campaign this week, MHACY has shared a video in English and Spanish with its residents featuring Rafaela Gonzales-Lamos, MD, an internal medicine physician who practices at NewYork-Presbyterian Lawrence Hospital in Bronxville and NewYork-Presbyterian Medical Group Westchester. The videos appear on the housing authority website and are being shared with residents through MHACY’s social media.

“We are grateful to Dr. Gonzales-Lamos for this excellent video which explains very clearly why residents should not fear the vaccine and why it is important for everyone to be vaccinated if we are to get back to normal,” said Wilson Kimball, President and CEO of the Municipal Housing Authority for the City of Yonkers. “I’d like to also commend NewYork-Presbyterian for performing this public service by taking on this important issue.”

Michael Fosina, President of NewYork-Presbyterian Lawrence Hospital, said that as the hospital that serves nearby Yonkers, they felt a responsibility to the community to address health disparities.

“At NewYork-Presbyterian, an important part of our mission as healthcare providers is health education,” said Fosina. “Working to provide accurate information about COVID-19 and the vaccine is an important public service, not only for those who are hesitant about the vaccine, but for the entire community.”

Racial and ethnic minorities are not only disproportionately affected by COVID-19 and experiencing higher rates of cases, hospitalizations and deaths, but they have also been vaccinated at a comparatively lower rate than white Americans. According to a study released March 17 by the Kaiser Family Foundation, white people in New York State accounted for 78 percent of those receiving the vaccine while Black people accounted for 10 percent and Hispanic people accounted for 11 percent. Although white people make up a larger percentage of the population (63 percent) compared with Black people (16 percent) and Hispanic people (19 percent), there is still a disparity in the numbers receiving the vaccine.

Experts point to lack of access to the vaccine as well as cultural and historical distrust of the medical community as some of the reasons behind the disparity.

About 60 percent of the population living in housing run by the Municipal Housing Authority are Hispanic and an additional 38 percent are Black. MHACY owns or manages 1,700 units of housing and oversees an additional 4,000 plus units of Section 8 housing.

“For me, the decision was simple. The risks of the COVID-19 disease were far greater than any risk the vaccine could have given me,’’ said Dr. Gonzalez-Lamos in the video. “This educational outreach is important to support the health and well-being of the communities that we serve.”

The video is part of an ongoing campaign by the housing authority to increase the number of public housing residents who are vaccinated. Last month, former New York State Governor David Paterson, the state’s first Black governor, appeared on MHACY’s virtual town hall meeting to speak to residents about why he got the vaccine. In February and March, MHACY worked with the New York State Department of Health to hold a special clinic to vaccinate seniors in public housing.